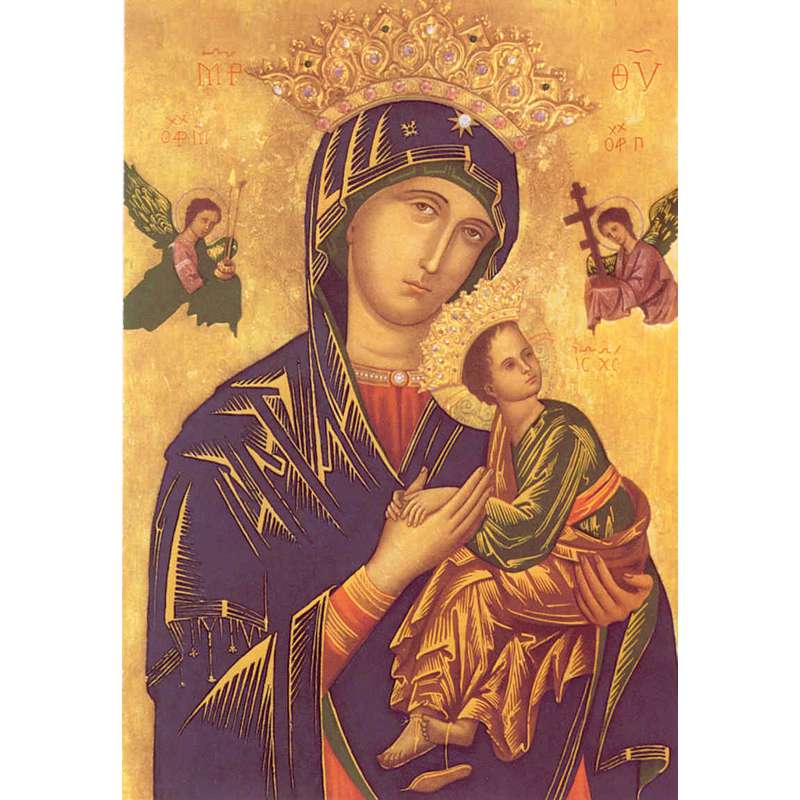 Icon of Our Lady of Perpetual Help

Description Icon of Our Lady of Perpetual Help

The story of this icon of Our Lady of Perpetual Help, currently preserved in Rome, is not very well known, but based on the various documents that have been found, we present you a summary of the history of this icon of Our Lady of Perpetual Help.
This religious icon, stolen by a merchant, arrived in Rome in the late fifteenth century from Crete where it already had a reputation as a miraculous icon. But before his transfer to Rome, the origin of this icon is unknown to us; until recently, its composition was placed in the tenth century in the very city of Byzantium, but, the carbon-14 analysis, made in the 1990s, situates its production between 1325 and 1480. The Roman merchant kept some time this Icon, but about to die, confided it to a friend asking him to fulfill his wish to give this icon to a church to be publicly honored. But this friend was slow to realize the merchant's wish. It took no less than several appearances of the Virgin with threats of misfortune for the icon to be finally placed in the church of the Apostle St. Matthew according to the wishes of the Blessed Virgin. This was realized on March 27, 1499. At that time this church belonged to the Augustinians. The icon remained exposed to the veneration of the faithful until 1798, when the church was destroyed by French troops. The Augustinians, before leaving the church of St. Matthew, took with them the venerable icon, but they could not place it on the main altar of their new church, St. Mary in Posterula, because it worshiped Notre-Dame- de-Grâce. So they contented to put it in a private oratory of their adjoining convent. She remained, for 65 years, ignored by all but a religious, Brother Agostino Orsetti, and his servant, a child from the neighborhood Michele Marchi, to whom the priest had confided his secret. It was the witness that Providence had kept for the honoring of the icon in 1863 thanks to a Jesuit priest. This holy religious, in a famous sermon, called with all his wishes for the rediscovery of this image of which he knew his origin and its reputation of miraculous icon thanks to written witnesses of the XVIIIth century. This sermon was known in the Redemptorist community, whose buildings since 1855, occupied the site at the end of which was formerly the church of St. Matthew, and in this convent was found Michele Marchi then a Father Redemptorist! This providential coincidence encouraged the Redemptorists to deposit at the foot of Blessed Pope Pius IX a petition to recover the icon. The Pope wholeheartedly granted this favor, and it was in this occasion that he would have said to the Superior General, "Make it known to the whole world!"
On April 27, 1866 began a solemn triduum during which the icon was installed with great pomp on the main altar of the Redemptorist Church. During this procession, the Blessed Virgin performed two miracles as if to express her joy and her satisfaction at this return to public worship of her miraculous image. Since then, the icon has remained there and the cult of Our Lady of Perpetual Help has spread throughout the world thanks to the zeal of the Redemptorist Fathers.

All the icons, except formats PRA and PRB, are provided with a hole on the back, so they are easily fixable to a wall. This hole is notched to facilitate its centering. The icons may also be displayed on an easel.

Data sheet Icon of Our Lady of Perpetual Help

7 other products seleted for you 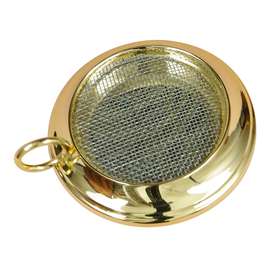 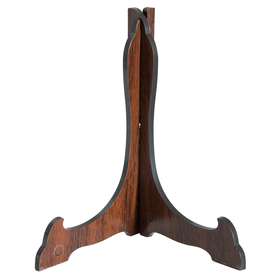 This easel model is particularly adapted to our M format icons. Reference: HCPL1 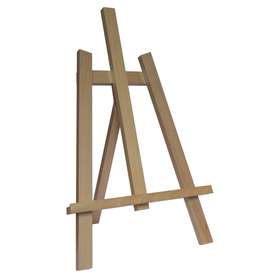 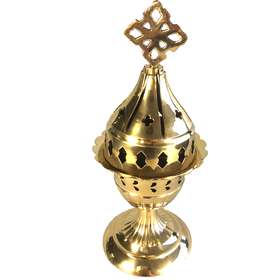 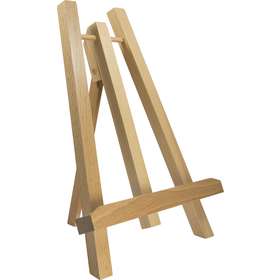 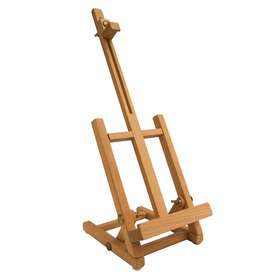 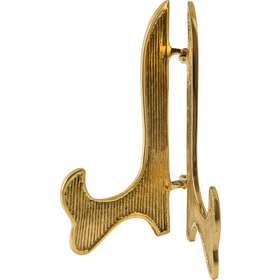 Reviews (0) Icon of Our Lady of Perpetual Help 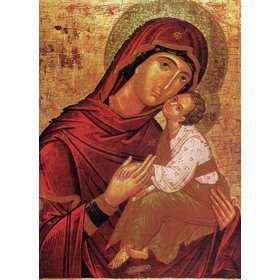 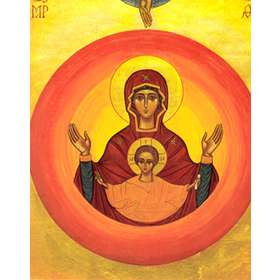 Virgin of the Trinity 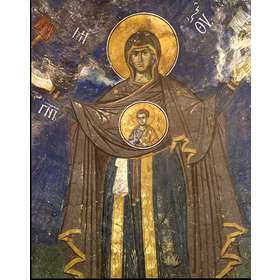 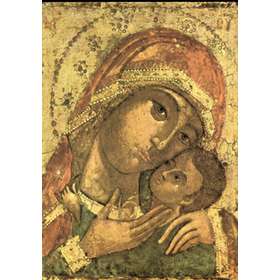 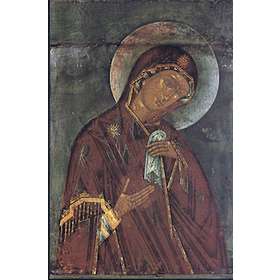 Icon of the Black Madonna...

Icon of the Virgin Eleousa... 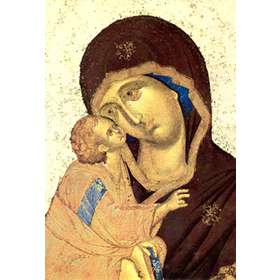 Virgin of the Gift 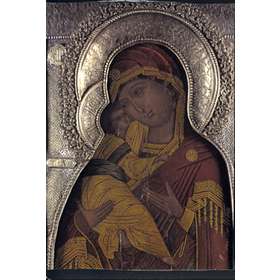 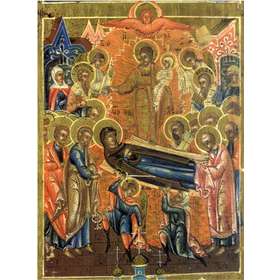 'Dormition of Our Lady' 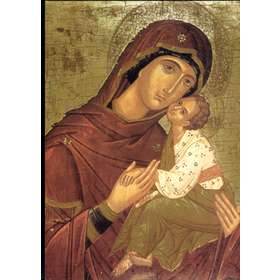 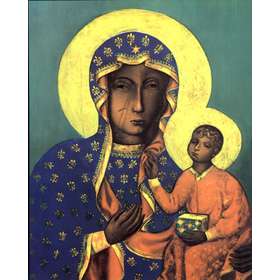 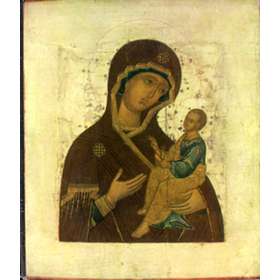 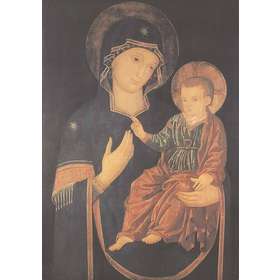 'Virgin of the Consolata' 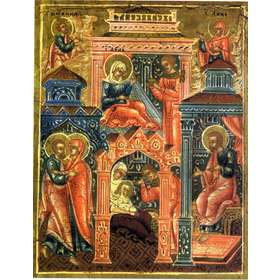