> Books>English>'Jesus Christ and His Church' 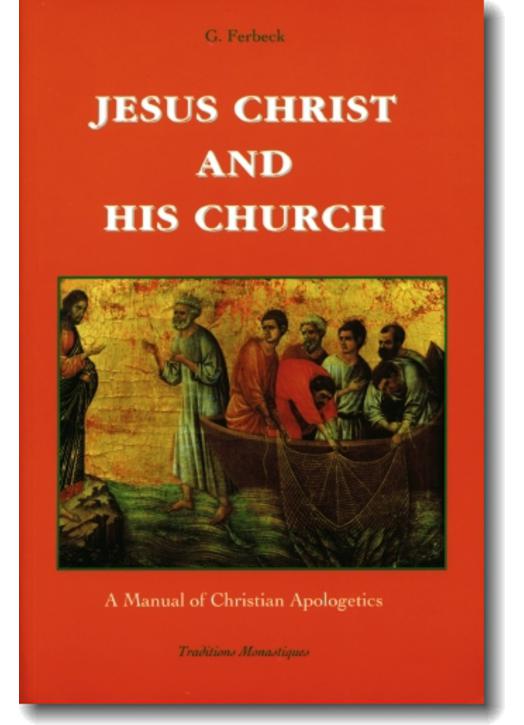 'Jesus Christ and His Church'

a manual of Christian apologetics.
Never before has the faith been put to the hard test of doubt, criticism or outright denial as it is today. In such a context, the faithful often find it hard to bear witness to the truth. And yet, the Apostle Saint Peter tells us we must always be ready to make our defense to anyone who demands from us an accounting for the hope that is in us - with gentleness nevertheless and respect (cf. 1 Peter 3 : 15).
Such questions as these therefore demand clearcut answers : Can we know with certitude that God exists? What is man's destiny? Is a revealed religion possible? Is it necessary? Do all religions come from God? Who is Jesus Christ? Is He the Son of God? What was His mission? How can we know with certitude which Church He founded? Is the Catholic Church the only true
Church of Jesus Christ?
The author of this apologetics manual bases his answers on natural truths which everyone can perceive, on the irrecusable witness of universal history, and on the given truths of Divine Revelation. All these arguments are laid out with the most rigorous logic. Though written nearly a century ago, this writing has lost nothing of its interest for us today. If you want to be an apostle for the truth in the world today, we highly recommend this timeless masterpiece of Christian Apologetics.
"The faith in a God that reveals Himself finds support in the reasoning of our intelligence. When we reflect, we observe that there is no lack of proofs for the existence of God. These proofs have been elaborated by thinkers in the form of philosophical demonstrations, according to the rules of rigorous logic. But they can also be expressed in a more simple form and, as such, they are accessible to any one who seeks to understand the significance of the world that surrounds him." (Pope John Paul II, July 10, 1985)